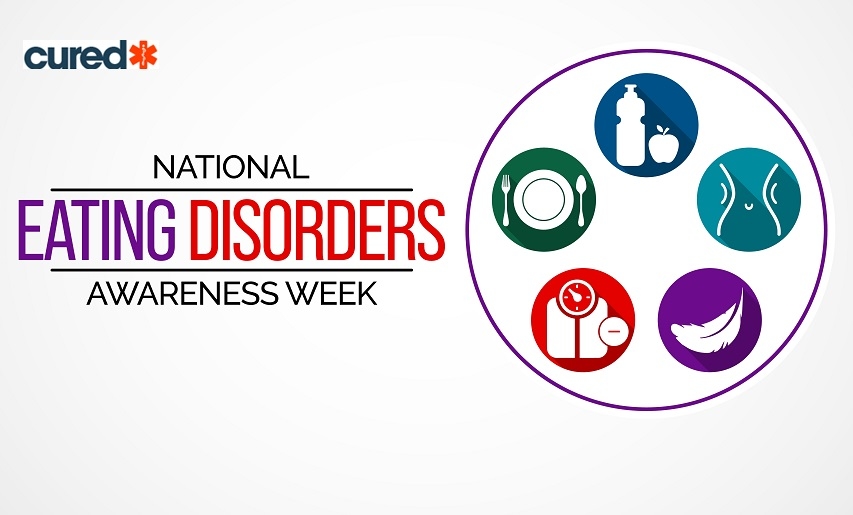 Every year, the National Eating Disorder Awareness Week 2022 is observed from February 22nd through February 28th. Eating disorders are severe but treatable mental and physical illness that affects the overall mood of all kinds of people, no matter their gender, age, weight, body shape, sexual orientation, race, or religion!

As per national surveys, over 20 million women and 10 million men across the US have had an eating disorder at some point in their lives.

This National Eating Disorder Awareness week, let’s understand the risk factors and health consequences of an eating disorder! These consequences and factors range across biological, socio-cultural, and psychological scenarios.

Understanding the risk factors involved is extremely important this National Eating Disorder Awareness Week 2022. Eating disorders are incredibly complex and can affect everyone. Risk factors involve a wide range of psychological, biological, and socio-cultural issues. These risk factors can interact in a different way for each individual since everyone can have different perspectives, symptoms, and experiences!

However, researchers have found specific broad categories to generally understand a few risk factors surrounding eating disorders. The factors listed below are applicable to those with anorexia, bulimia, binge eating disorder, or even OSFED.

One key risk factor in understanding this National Eating Disorder Awareness Week 2022 is perfectionism. Self-oriented perfectionism is something that involves setting really high expectations for oneself. In order to meet those, one tends to develop an eating disorder.

Most people with an eating disorder often have a history of an anxiety disorder at some point in their past. There is a significant subset of these two psychological conditions. Generalized anxiety, social phobia, OCD, it can be anything!

Apart from a personal history of anxiety disorders, people who developed an eating disorder often followed the rules a lot. They always had one “right way” to do a particular task. Most anorexic people were pretty inflexible in terms of their behavior in the past.

- A close relative with a mental illness can also increase your chances of developing an eating disorder. Anxiety, depression, and addiction often run in the family genes.

- Any history of dieting and weight-control methods is often associated with the development of binge eating in the past.

- A negative energy balance, burning off more calories than one takes, can start the disorder in some cases.

- The stigma associated with weight, that “thin looks better” can lead to dissatisfaction with one’s body shape. This can lead to the development of an eating disorder.

- Any form of teasing and bullying can have multiple adverse effects on one’s brain, especially regarding one’s body image. This could lead to the development of such disorders.

- Ideal internalization or simply buying into this message that society spreads about what a perfect body looks like can increase the likelihood of developing eating disorders.

- Being socially isolated, lonely, and lack of many social networks are hallmarks of anorexia. Most people with such a disorder tend to have fewer friends or minimal social interaction with others. However, their link to social phobia or social anxiety is unclear yet.

- Trauma - historical or intergenerational, like present among the Jewish Holocaust survivors community can lead to intrusive trauma and stress. It also leads to depression, psychic numbing, unresolved grief, elevated mortality rates, and other negative consequences of such trauma. In turn, oppression of such kind can, in a few cases, lead to developing an eating disorder.

Apart from all the risk factors, understanding the expected health consequences is also extremely important for this National Eating Disorder Awareness Week 2022.

- Not consuming enough calories means your body will break down its tissues to function. Muscles are the first organ that breaks down in such conditions, and one of the most important muscles in our body is our heart. Our blood pressure and pulse can begin to drop since our body is trying to eat our heart, which is necessary to fuel our entire body. This increases our risk for heart failure.

- Purging out stuff by laxative abuse or vomiting can rid your body of critical chemicals like electrolytes. Electrolyte potassium serves an essential purpose in our heart’s functionality - for beating and contracting. Other electrolytes, like chloride and sodium, can also be rid of our bodies by being in a state of imbalance. Electrolyte imbalances can also lead to irregular heartbeats and eventually death due to heart failure.

Gastroparesis, also known as slowed digestion, is a way of restricting food in your body. People often purge and dispel food by vomiting, interfering with digestion or nutrition. This can also lead to -

- Blocked intestines due to undigested food being stuck

- Feeling fuller even after eating a minimal quantity of food

- Inadequate amounts of nutrients consumed. This means that there is not enough food in our intestines for our digestive system to eliminate.

- Not getting enough nutrition for a long time can often weaken the muscles in our intestines, leaving them without the strength to function correctly in the long run.

- Laxative abuse can also lead to the decline of our bodies due to nerve damage. Our bodies might be dependent on them permanently for bowel movements.

3. Binge eating causes our stomach to rupture, which is a life-threatening condition.

4. Vomiting wears down our esophagus and can often lead to rupturing of the same. This is also a life-threatening condition.

- Frequent vomiting can also lead to a hoarse voice and sore throat.

5. People who make themselves vomit for a long time can develop swelling around the front of their ears and salivary glands under their jaw. This also happens when people stop vomiting.

6. Purging as well as malnutrition can cause pancreatitis, which is an inflammation of our pancreas. Pancreatitis’ symptoms include nausea, vomiting, and pain.

- Physical obstruction of our intestines due to ingested items.

- Intestinal obstruction and blockages prevent food and water from being dispelled through the intestines.

- Bezoar is a trapped mass of indigestible material in our gastrointestinal tract.

- Infections like toxocariasis toxoplasmosis can occur because of ingesting dirt and/or feces.

- Intestinal perforation caused due to ingestion of nonfood items can create holes in our stomach, bowel, and intestines wall.

- Poisoning or heavy metal poisoning due to ingestion of lead-based paint.

1. Even though our brain weighs just three pounds, it tends to consume at least one-fifth of our body’s calories. So, dieting, fasting, erratic eating, and even self-starvation can lead to our brain not getting enough energy it requires. This can lead to people losing concentration.

2. Fullness or extreme hunger during bedtime can cause difficulties falling or staying asleep for long.

3. Our neurons need insulating from a protective layer of lipids to conduct electricity. Not consuming enough fat can damage this layer, which causes numbness and tingling in our hands and feet.

4. Our neurons require electrolytes to send chemical and electrical signals to our brain and body. Dehydration and electrolyte imbalance can also lead to muscle cramps and seizures.

5. If our brain and our blood vessels are unable to push enough blood to our brain, it can lead to dizziness and fainting, especially when standing.

6. People with higher body weight are at an increased risk of sleep apnea, which is a disorder where a person can stop breathing while they are asleep.

1. Our body can make most of its necessary hormones with the help of cholesterol and fat that we consume through food. Our hormone levels can suffer from the lack of calories and fat, including testosterone, estrogen, and thyroid hormones. Due to the imbalance in estrogen, women can also experience an irregular menstruation cycle, sometimes even stopping entirely.

3. A reduction in our resting metabolic rate happens due to our body trying to conserve its energy.

4. Binge eating can increase our chances of our body becoming resistant to insulin, which is a hormone that gets power from carbohydrates. This can eventually lead to Type 2 diabetes.

5. Without enough energy in our body to fuel our metabolism, our body temperature can drop, and hypothermia might develop.

6. Starvation can cause our cholesterol levels to rise. Although, this is not a clear indication to restrict our dietary fat, cholesterol, and even lipids.

1. A low caloric and fat-based diet can cause our skin to dry and hair to fall out by being brittle.

4. Lack of nutrition by not eating enough can decrease the intensity of some kinds of blood cells.

5. Anemia can develop when there is a low number of RBCs in our blood or a lack of iron in our diet.

6. Other problems our bodies develop due to lack of nutrition are weakness, fatigue, and shortness of breath.

7. Malnutrition can also cause a lack of WBCs, which help fight infections in our bodies.

Eating disorders of all forms are severe and life-threatening. They can affect a person’s emotions as well as physical health. They are so much more than just a “phase”!

People just don’t go about their lives “catching” an eating disorder. It is a struggle. This National Eating Disorder Awareness Week 2022, let’s come together and understand the consequences and risks involved to raise awareness and educate people about the dangers involved!