Everything about claustrophobia You Must Know 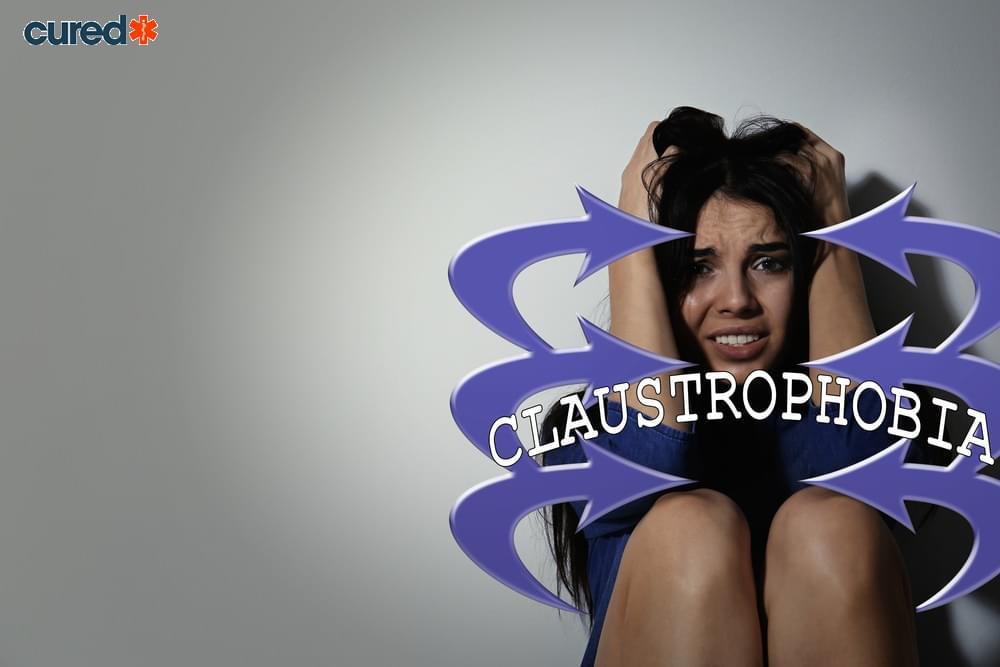 Claustrophobia is a type of phobia or an anxiety disorder, which creates an unexplained fear of being confined or not having the space to escape. It triggers an intense fear of being enclosed in some spaces where there is no escape. If you often feel stuck, suffocated & nervous when you are in an elevator or some crowded place — you might be suffering from claustrophobia.

In this post, we’ll talk everything about claustrophobia: What is claustrophobia, how it gets triggered, why it is caused, what are the symptoms & how claustrophobia can be treated. Let’s read the article to discover:

Claustrophobia is the fear of being in some closed or narrow space where escape seems difficult for the affected person. The term claustrophobia has been developed from two words claustrum (Latin) & Phobos (Greek) meaning “a closed-in place” & “fear” respectively.

People who are suffering from this condition go any length to avoid being in closed & confined spaces where their panic & anxiety can get triggered. Most claustrophobic patients would prefer using stairs instead of the elevator. As many as five percent of the Americans suffer from claustrophobia but most of them do not go for the treatment.

Claustrophobia symptoms usually trigger during childhood or adolescence. However, in some cases, it may also get triggered during adulthood. When claustrophobia triggers the person feels not being able to breathe and the body feels running out of oxygen.

If you usually suffer from any of these symptoms while in a confined or narrow place, you may be suffering from claustrophobia. Let’s dive to know about the symptoms of Claustrophobia:

These are some common symptoms of Claustrophobia. For some people, it is very difficult to take control of such situations. However, with proper treatment & doctor’s consultation, the fear of being in a small space can be taken care of effectively.

When we say small spaces — there could be different versions of small spaces. While some of these spaces are common for all claustrophobic patients, some of them trigger such feeling of fear --  only among a group of patients.

Type of places that may trigger claustrophobia:

Claustrophobic people react in a certain way when they are in such places. At the back of their minds, the fear of being trapped is always running. They would do anything and everything to manage their fear.

Here are some common ways in which a claustrophobic person would react whenever he/she is in some closed space as mentioned above.

What can Cause Claustrophobia?

Claustrophobia is often found in people who have suffered a certain kind of fear during their childhood. In most cases, it is those childhood fears that become the long-term reason for developing a sense of anxiety & depression in small spaces.

Here are some experiences that might be the reason for people to suffer claustrophobia.

It happens in a way that the person starts relating that feeling of (any kind of) fear in their mind to the small space. And, the mind & the physical body reacts similarly as it reacts when trapped in some kinds of mental quagmire. There could be any physical, or genetic factor or maybe a smaller amygdala, that could cause Claustrophobia.

How to get Treated for Claustrophobia?

Don’t worry! There are ways to treat this condition, but you have to take this seriously and not underestimate it.

If you often have noticed the symptoms that are listed at the beginning of the article, you must consult a psychologist. Based on your level of Claustrophobia, you will be recommended with certain treatment options.

Let’s see what all are the treatment options for Claustrophobia. Here we go:

Psychologists based on your condition will recommend relaxants and antidepressants, but they will definitely not solve the underlying issues.

Under this form of treatment, your doctor will try to retrain your mind so that the fear could be dealt with properly & normally. This may include gradually helping the patient to face their fear and get normally exposed to these small places that they fear.

This is a very usual way of dealing with any problem. You observe others, learn from them, get inspired by how they deal with a similar problem. This will give the patient time to dive deeper into why the other people are fearlessly handling the situation.

Using the technique of visualization, relaxation, and meditation to deal with these problems. This way they can deal better with negative thoughts and come out stronger.

However, medicines are not a great way of treating Claustrophobia, but in certain situations, they can help deal with it. There are certain natural products & calming oil that can help with panic & anxiety.

Claustrophobia treatment may take around ten to eleven weeks. Your doctor would recommend treatment or therapy sessions as per the specific case. In addition to that certain lifestyle changes like meditation, yoga, eating healthy, reading, writing journal, pursuing your hobby can make a big difference. While it is a good idea to see a doctor or therapist, you must pay attention to your lifestyle for that matter.